The 1988-1998 conflict on the Papua New Guinea island of Bougainville saw use of WWII weapons. While this alone was remarkable just before the turn of the millennium, what is absolutely astonishing was that the weapons had been “resurrected” from the WWII battlefields. 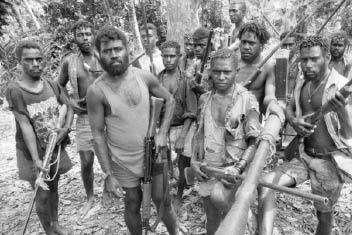 (Fighters of the Bougainville Revolutionary Army in 1997, near the end of the conflict. The heavy weapon with it’s barrel pointed towards the camera is a WWII Imperial Japanese Army Type 96 25mm anti-aircraft gun recovered from the jungle. Almost unbelievably, it still functioned.)