For readers of wwiiafterwwii in the United States, I would like to extend wishes for a happy July 4th, our nation’s 246th birthday.

Below is a quite unusual Independence Day scene, taken in Berlin on 4 July 1945 – the first Independence Day after the European part of WWII ended and while combat in the Pacific was still underway.

The damaged building which both the Stars & Stripes and Hammer & Sickle are flying above, was the WWII headquarters of the 1st Waffen-SS Panzer Division, the LSSAH  (Liebstandarte SS Adolf Hitler) as can be seen on the cornice of the building atop the four columns. 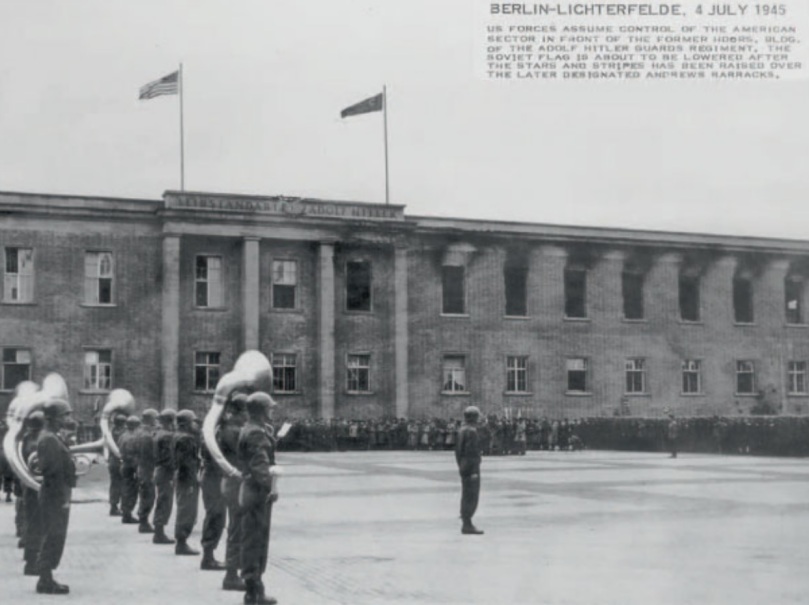 END_OF_DOCUMENT_TOKEN_TO_BE_REPLACED

I would like to wish a merry Christmas to all readers of wwiiafterwwii.

Below is the WWII-veteran aircraft carrier USS Essex (CV-9) in 1961. The crew is spelling out “Merry Christmas” in Dutch for a port visit to the Netherlands. 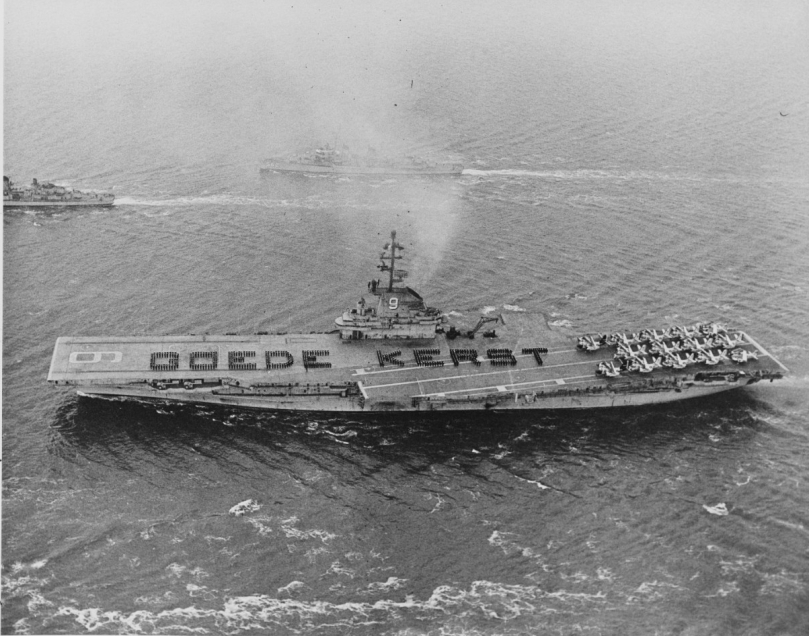 USS Essex was the leadship of the Essex class fleet carriers. Perhaps more than any other single warship design, the Essex class was instrumental in the US Navy’s victory in the Pacific theatre of WWII. USS Essex commissioned on 31 December 1942 and participated in the Tinian, Marcus Island, Marianas, Leyte Gulf, Lingayen Gulf, Iwo Jima, and Okinawa battles of WWII. USS Essex later fought again during the Korean War and participated in the Cuban Missile Crisis; and was the Apollo 7 recovery ship. USS Essex finally decommisisoned in 1973 and was scrapped in 1975.

Like many Essex class carriers, USS Essex was extensively modernized after WWII. One interesting item is below:

END_OF_DOCUMENT_TOKEN_TO_BE_REPLACED

I neglected to make an intended “anniversary” post for one year of being online, and later two years, and five years, and 100 subscribers, and then finally the number of days WWII ran. As you can tell I am not well with remembering events. So belatedly, this is the sixth anniversary of wwiiafterwwii, now longer than the war itself lasted.

I thank all readers / commenters for the knowledge shared over the years.

While I just write these for general enjoyment, I do try to keep the atmosphere at least plausibly scholarly and thus avoid “silly” or irrelevant topics. So, normally I would not touch on something like the below. But I figure, just once can not hurt, so here is a bit of “lighter reading”.

END_OF_DOCUMENT_TOKEN_TO_BE_REPLACED

I debated writing on this topic as it really doesn’t fit the theme of WWII weaponry being used after WWII. However in the past I have described how WWII warships were preserved, how they were modernized, and how they were transferred between countries. So maybe this will be of interest.

(The ex-USS Franklin (CV-13) being scrapped in 1966. This aircraft carrier had been terribly damaged in 1945, repaired at great expense, but never again used. Cut metal from other WWII warships fills the property of Portsmouth Salvage.) 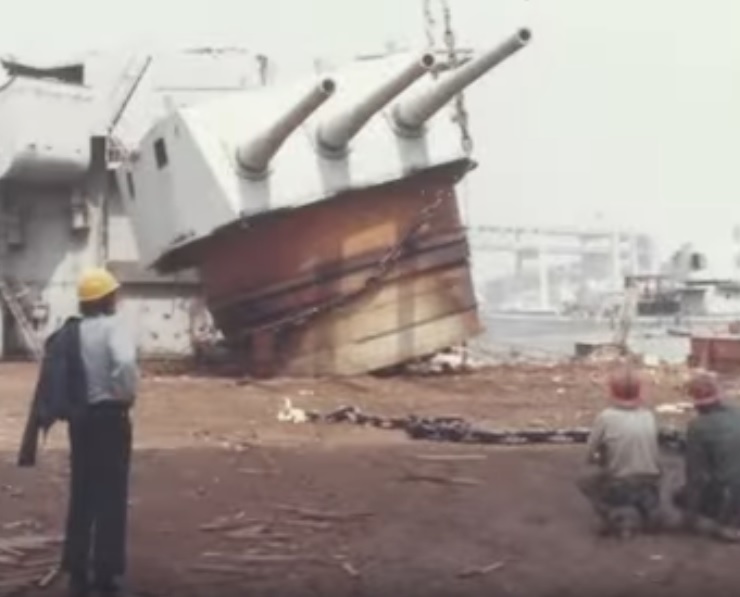 (A Mk15 triple 8″ gun turret yanked off a WWII cruiser by Zidell during the 1970s. Zidell scrapped hundreds of WWII warships.)

(The ex-USS Sphinx (ARL-24), a WWII repair ship, being scrapped in 2007 by Bay Bridge Enterprises. The original shipbreaker for this job went bankrupt, which happened with increased frequency in the 1990s and 2000s.) (photo by Robert Hurst)

END_OF_DOCUMENT_TOKEN_TO_BE_REPLACED 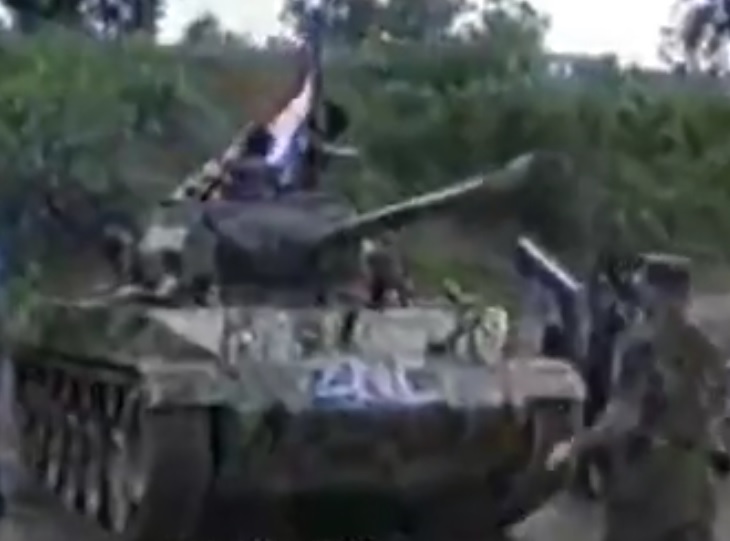 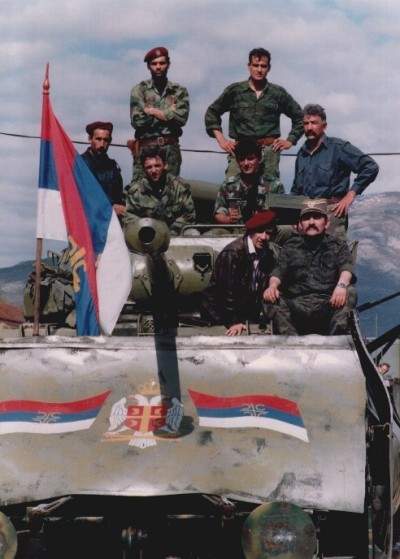 END_OF_DOCUMENT_TOKEN_TO_BE_REPLACED

To readers of wwiiafterwwii, I would like to wish a Merry Christmas and happy holiday season.

Above is the Christmas mess deck menu of USS Culebra Island (ARG-7), a Luzon class engine repair ship, for Christmas 1945, the first after peace returned.

USS Culebra Island‘s pennant number used an experimental new font intended for the postwar fleet, which in the end was never adopted by the US Navy. On 18 December 1946, USS Culebra Island was declared surplus to the needs of the peacetime military and decommissioned into reserve. The ship remained stored in the Suisun Bay, CA reserve anchorage until 10 December 1973, when the badly-rusted hull was auctioned off as scrap. The WWII-veteran ship was broken apart at Portland, OR in early 1974.

Since starting wwiiafterwwii, I receive from time to time suggestions for topics. These are wide-ranging but two in particular seem very popular: WWII weapons in the Vietnam War, which has been touched on several times; and a general question of how the world “cleaned up” WWII battlefields after the war. For the latter, I was surprised at how very little is written about it so perhaps this will be of interest.

One of the reasons WWII battlefields did not remain littered with vehicles for long was that, with the lone exception of the USA, all of the major warring powers made some official level of combat usage of captured enemy arms during WWII. The most formal was Germany’s Beutewaffe (literally, ‘booty’ or ‘loot’ weapon) effort, which encompassed everything from handguns to fighter aircraft with an official code in the Waffenamt system; for example FK-288(r) (the Soviet ZiS-3 anti-tank gun), SIGew-251(a) (the American M1 Garand rifle), and Sd.Kfz 735(i) (the Italian Fiat M13/40 tank). Captured gear was assembled at points called Sammelstelle and then shipped back from the front lines for disposition.

END_OF_DOCUMENT_TOKEN_TO_BE_REPLACED

The last appearance by WWII German tanks on the world’s battlefields came in 1967, when Syria’s panzer force faced off against modern Israeli armor. Quite improbably, Syria had assembled it’s collection of ex-Wehrmacht vehicles from a half-dozen sources over a decade and a half timeframe.

END_OF_DOCUMENT_TOKEN_TO_BE_REPLACED

For my readers in the USA, I would like to extend wishes for a Happy Independence Day, 4 July 2016, as we celebrate 240 years of our nation.

(A nest of US Navy amphibious ships serving the occupation force at the former Imperial Japanese Navy base at Yokosuka on 4 July 1946, the first post-WWII Independence Day celebration. Most of these ships were soon scrapped but LSM-159 and LSM-439 were later transferred to the nationalist Chinese navy.)

Merry Christmas to all readers of wwiiafterwwii.

USS Zelima had been launched as a merchant ship during WWII but completed as a stores ship, commissioning 16 July 1945. After WWII, USS Zelima participated in the Korean War and then the Vietnam War, including the 1969 Tet Offensive. USS Zelima decommissioned in 1969 and was mothballed at the Suisun Bay, CA reserve fleet anchorage. The WWII veteran was never recalled to duty and was sold to Levin Metals in November 1981.

USS Sproston commissioned on 19 May 1943 and fought in WWII. After the war, the destroyer continued in service and was finally decommissioned on 30 September 1968. The WWII veteran was sold as scrap in December 1971 and towed to Taiwan for dismantling in 1972.

USS Nicholas commissioned on 4 June 1942 and fought in WWII including the 1943 Solomon Islands campaign, where the destroyer won a Presidential Unit Citation. In 1944 USS Nicholas sank the Japanese submarine IJN I-38 which itself was carrying Kaiten suicide-attack manned torpedoes. After WWII, USS Nicholas fought in the Korean War where the destroyer earned a South Korean Presidential Citation; making the ship decorated by heads-of-state of two nations. USS Nicholas received a FRAM II upgrade and fought in the Vietnam War, and finally served in NASA Apollo spacecraft recovery missions. The WWII veteran USS Nicholas finally decommissioned 30 January 1970 and was scrapped in Portland, OR later that year.

Below is USS Zelima‘s Christmas 1953 menu.